Stage AE is a huge multi-purpose Pittsburgh entertainment complex housed on the North Shore of Pittsburgh. Included on site is an indoor concert hall with a capacity of 2,400, as well as an outdoor venue that can seat 5,500. There’s also a smaller indoor nightclub with a capacity of 350 – 400 partying people.

The venue is adjacent to Heinz Field, which is the home of the Pittsburgh Steelers – who are partial owners in Stage AE. The total indoor space available is a massive 22,000 square feet, with another 30,000 square feet in available lawn space. There are around 100 events held here every year – which equals out to a show every three days or so.

The venue opened in December, 2010 and the naming rights were bought by American Eagle, whose offices are based on Pittsburgh’s south side. Past performances include Cake, Girl Talk, Wiz Khalifa, and George Clinton, and during winter months a portion of the outdoor venue is turned into an ice skating rink that’s open to the public.

Food and beverages are sold at the venue, though you can expect to pay quite a bit more than you would at surrounding clubs. Most shows are all-ages, and there are very rarely seated shows. Show up early if you want a spot near the coveted stage. 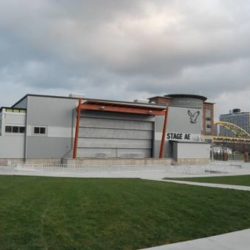