About The Paramount Theatre

Since 1927, Washington residents and visitors have been entertained at Downtown Seattle’s brilliant Paramount Theatre. Millions have delighted in The Theatre’s architectural majesty, seen countless pictures, and appreciated a large number of performers from all possible corners of the earth. The story of The Theatre itself offers play as compelling as any presented on its stage or screen.

Regrettably, the Theatre slid into debt through the 80’s, making repairs impossible. The Volotin Company began attempting to sell off The Paramount’s assets and ended up filing for bankruptcy protection in late 1987 when no purchaser materialized.

Nevertheless, Paramount Theatre re-opened on March 16, 1995, establishing the newest touring production of “Miss Saigon.” Patrons were greeted by the return of Broadway to the Theatre, and welcomed by the brand new facility in all its rehabilitated glory.

The Paramount hosts many great shows, including musicals, stand-up comedians, and music artists.
For sit-down shows, the venue provides auditory aids in exchange for your ID, which they will return once you hand in the borrowed auditory aid.

Additionally, there is a bar across from the entrance to the seating area where there is limited seating but a well-enough stocked bar to get your buzz going at a decent price. Just be aware that you cannot take open cups into the theatre, so you must finish your beverage before the show begins. 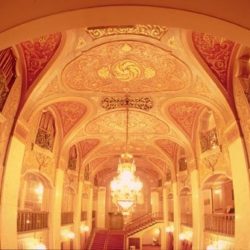 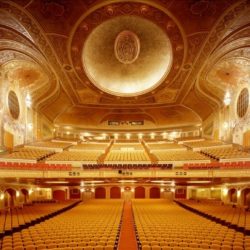