Since opening in 1994, it has established itself as one of the top concert venues in the world, and Asbury Park, NJ’s The Saint has developed the reputation as a place where the music rocks, and the good times roll.  Considered as much a legend as some of it’s better known counterparts – places like the Stone Pony (also in Jersey), NY’s Living Room, or the Cellar Door in DC – The Saint has served as the home of live rock and roll in Asbury Park, providing a place for up-and-comers make their bones, and established bands to get back to their club roots.  The list of acts that have graced the stage at The Saint include current chart climbers like Airborne Toxic Event and the Kings of Leon, hip hop/country crossover Everlast, the heavy death metal of Cannibal Corpse, the poppy folk of Teagan & Sarah and New Jersey’s favorite son himself, Bruce Springsteen.  It’s a venue with a diverse following and a diverse lineup.

As befits a club dedicated to rock n roll, The Saint doesn’t stand on pretension or its good looks.  Small, intimate and covered in stickers and graffiti, it’s the sort of place one goes for the music, not the bottle service.  It’s also become something of an scenester’s paradise, as you’ll frequently find local music favorites and legitimate rock stars hanging out enjoying the shows.

As well as the plugged-in frenzy of guitars and soaring vocals, you’ll also want to check out the Asbury Café, when the club dons its alter ego as a respectable acoustic venue (no talking, plenty of seating for the less dance/slam pit oriented shows).  Well regarded by locals and tourists alike, The Saint is the best place in Jersey to catch a live show.  And that might just make it the best place in Jersey, period. 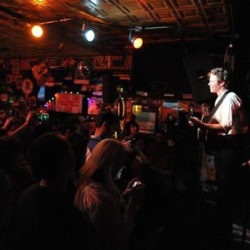