The Traktor DJ app for iOS is the most powerful DJ application on the planet. It gives users the ability to DJ their iTunes music library using most the features found in the Native Instruments Traktor Pro program on both OSX and PC. From the sync button to the various FX (effects), the Traktor App puts more power at your fingertips than any other DJ app on the market. 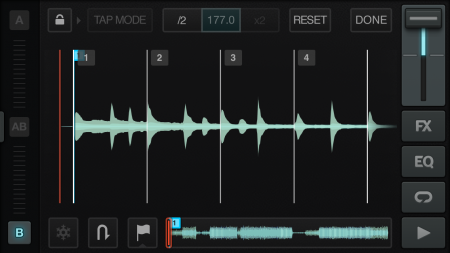 Beat Matching Grid Mode – In this window, users can match the beat of their music to the overall global tempo.

The interface of Traktor DJ is very user-friendly and for a user of Traktor Pro. I had no difficulty navigating the interface, though if I had never used Traktor on my computer, I might have wanted to read directions on how to operate the software. Upon first use of Traktor DJ, I found a few bugs, which were quickly resolved in a day by the hard working Native Instruments team. 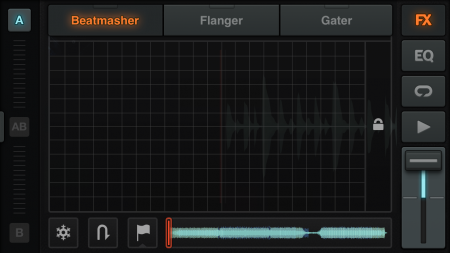 FX Grid – This is the X/Y touch activated pad which controls the time/depth of the selected FX.

One of the main benefits of Traktor DJ is the FX section. Native Instruments included 8 of the most commonly used FX found in Traktor Pro, and have imported them into the app. One main benefits the app boasts over Traktor Pro is the use of the touch based X/Y pad used to control the FX section. This gives the user the power to control both the depth and the time of the FX used with the touch of a finger. I expect to see this idea become the standard for controlling touch-based effects in other competing apps. 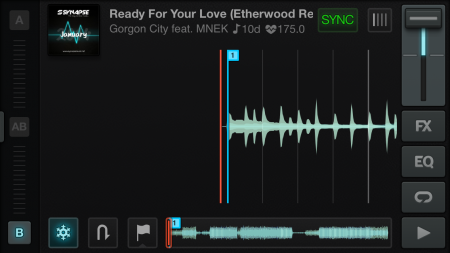 Player Interface – This is the general layout of the Traktor DJ app. From this screen, you can navigate playlists, activate FX and crossfader control.

One drawback I have found is in the analyzing and preparation of songs. When analyzing songs, it sometimes gets the BPM wrong. This can be remedied by using the /2 and x2 buttons in the preparation section. In addition, I have found that trying to operate the program on an iPhone can be a bit cumbersome. To use this playing out, I would definitely use an iPad, which would allow much more room for navigation.