Who thought a simple text amongst pals would turn into a viral sensation? Las Vegas’ newest afterhours, simply called “After,” prepared to launch on February 1 in the building old-school clubbers remember as Utopia and Empire Ballroom. DJOYbeat was already hot on the tip that the underground house and techno scene needed a home, thus we jumped on-board as sponsors of the venue (full disclosure). But when After’s managing partner Thom Svast texted me a draft of a list of DJ rules for the party, it was too good not to share. Afterall, it is what underground electronic fans think about the current state of DJ sets—particularly in Vegas.

“I made this for the DJ booth. Laminating and posting on booth,” Svast texted me on January 30 at 8:43 p.m., along with a picture of his computer screen. 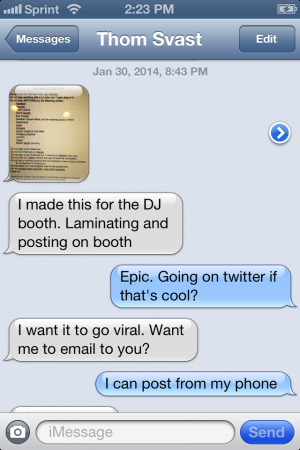 “I want it to go viral,” Svast texted back. So I posted it. Who knew it would spread like wildfire? (And spurn blog coverage throughout the country, though no one mentioned it was taken directly from my Twitter, so shame on all of you for not following journalistic rules of citing the source).

I wanted to check back in with Svast to get his thoughts on what started as a sorta tongue-in-cheek post for the eyes of our local house music community. It has since garnered the attention and support from many big players in the game, including one who liked it so much, he instantly reached out to Svast about wanting to play at After (and only DJOYbeat has the exclusive details on who it is. We’ll release the news in the next few days, so keep checking back).

Q: That Twitter post spread faster (and was stolen more) than anything I’ve ever put out there. Did you know there’d be not only a reaction, but such a supportive one?

A: Oh my God. You were the first one to post it and I didn’t have a chance to make any revisions before it went out all over the place. The next morning our phones kept dinging one message after another. Overnight it had made its way around the world and the reactions were amazing. Since then it’s like a bad car accident—you can’t take your eyes off of it and its like we’re gawkers at this point and all we can do is sit back and watch it. I love that big DJs are into it. Kaskade is joking around about “All these years, all the hard work. All the time + effort. And I didn’t even make the list?? C’mon!”

Q: But there’s a fair share of haters, too, when it comes to After’s preference for avoiding the popular big-room EDM sound. And I think Martin Garrix got his feelings hurt.

A: The one thing in hindsight is maybe not calling Martin a douche. He’s a kid and what it was was a knee-jerk reaction. The previous day I read the DoAndrioidsDance article with him about copycatism. When I was typing it up, there were some other articles that popped up about his attitude. I wasn’t thinking about that he’s still a teenager; I reacted as if he were an adult. So that’s where the “douche” came from. But actually, it was supposed to say “Dutch” since that’s where he’s from, but autocorrect changed it to “douche!” [Laughs.]

Q: So is that an apology, or should he get his panties out of a wad and learn to play with the big boys? 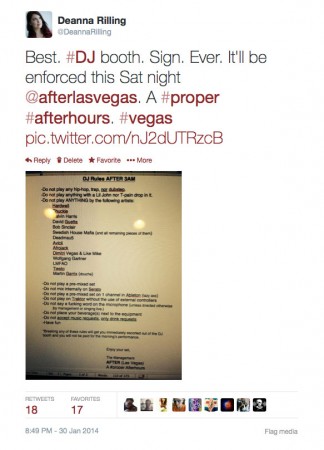 A: He does need to learn how to play with the big boys. But I don’t have anything against those guys [on the list of forbidden producers] and what they do. I just don’t care for their music.

Q: Your rules also mentioned another hotly-debated aspect of DJ sets these days.

A: The thought process was, you see all these things online with DJs playing with CDJs unplugged or on one channel. … I have nothing against technology if its used correctly. Just don’t be a lazy ass, work for it.

Q: Then there’s the dubstep, trap and hip-hop fans who weren’t too happy with the list.

Q: What do you think about notable artists sharing in support of the DJ rules list?

A: It solidified what I was doing and showed the love. Someone said, “It’s about finally time someone spoke up for what we’re all thinking.” The underground community is sick of hearing and seeing this, I think it’s become more of a movement across the world. There’s always haters and doubters, but its given people a chance to voice their opinion and I love watching the battles back and forth—not fights—but debates. People take their music very personally. It’s grown the music, gives people the chance to voice their opinion, gives people an opportunity to stand on a soap box and gives people a voice and I think that’s amazing.

Q: How do you feel the grand opening went? 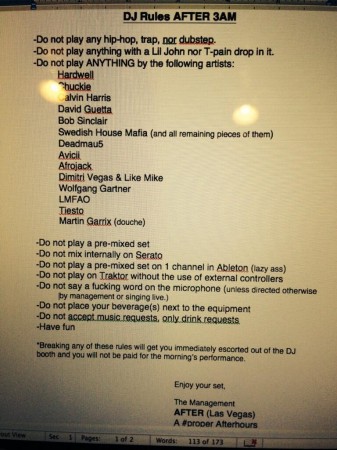 A: The first night went awesome. The energy in the building was amazing. There were so many hugs and handshakes. We didn’t even plan on opening the second floor, but we were oversold the first night. The dancefloor was packed all night, too.

Q: Any hints who’ll be joining residents Black Boots and Spacebyrdz in the coming months on Saturday nights?

A: I have 10 people already lined up with dates, but the contracts aren’t signed yet.

Q: Does you think buzz will continue and tourists might start delving into the underground in Vegas, too?

A: Yes, just our table reservations are coming in hard and fast. Locals came out in huge support and I want to thank them for that; I love our house community here. It’s a tight group and they really show the love for each other and the music. We’re kind of a grassroots effort. Everyone who likes house and techno now has a home when they come to Vegas.